Two fastballs for strikes, a third one taken high for a ball. With the count 1-and-2, another four-seamer up in the zone. Joe Mare recognized the pitch, timed it . . . and whiffed.

And for those who know him, it was a wonderful sight.

That game – C.W. Post’s 12-6 loss to Felician in North Carolina on Feb. 20 – and that at-bat, Mare said, with the Pioneers trailing by six in the ninth, were the most meaningful and fulfilling he’s ever had.

That his concerns were “we went 0-4 on the road trip” and “my bat speed needs to improve” is a testament to how far the former star has come.
Three years ago on that date, after a car accident, he was comatose and the prognosis still was uncertain.

Mare, now 24, says he doesn’t remember anything about the day or the incident – just morsels of information pieced together from police reports and others’ accounts.

At about 2:30 a.m. Feb. 10, 2008, the Whitestone native was struck by a car while crossing Francis Lewis Boulevard. Mare’s father, Tom, said the driver – who wasn’t charged – called 911, and Mare was rushed to New York Hospital in Queens. There, relatives said, doctors discovered a fractured skull, cranial hematoma, brain trauma, a collapsed lung and broken bones that included an orbital socket, an elbow, and tibia and fibula in both legs.

“When I first saw him, I was in a trance,” said Mare’s brother, Steve, 20. “It didn’t even look like him. He was all bloody and his face was blue.”

His mother, Nancy, recalls looking to an EMT for assurance, “and he looked down and shook his head.”

An operating room nurse had given Joe “about a 20-percent chance to live,” she said.

Mare remained unconscious for almost a month. In late February, he was transferred to the traumatic brain injuries unit of Jamaica Hospital, where he stayed until he was released May 2.

Upon awakening, Mare said, he immediately recognized close relatives – but every memory, every detail of his life, had been deleted. What he knows now about his past comes mostly from stories and photos. The awards in his bedroom are what tipped him off about his baseball career.
But some things, perhaps, are intrinsic.

“The smell of the field, the feeling of warming up, sitting in the dugout,” Mare said of his return to the diamond last month. “It almost feels like I never left because those feelings seemed familiar.”

Mare gauges himself at “about 70 percent” and admits his skills aren’t close to where they were. He’s now a backup infielder who’ll get occasional playing time.

Three years ago, however, he was the team’s No. 3 hitter, the face of the program, featured prominently on the cover of Post’s athletic brochure. As a junior, he batted a team-high .402, led the team with six homers and 51 RBIs, and set the Pioneers’ single-season record with 82 hits.

He was an honorable mention All-American and was selected to the All-Region first team.

The third baseman even had drawn some big-league interest, his father said. Mets and Brewers scouts planned to give him a look in spring 2008. “Ooh, I was that close!” Mare said.

Now the baseball stardom days are gone; he knows of his own achievements the same way he does Honus Wagner’s: through statistics and stories of his feats.
“I don’t expect to ever get them back,” he said of the things forgotten, “so I’ll have to create new memories.”

Mare now is a graduate student working toward a master’s degree in counseling. He works as a guidance counselor at Holy Cross, his old high school, for college credit.

His speech still is a bit slurred, and only in the last month has he been able to run without pain after having re-learned how to walk. The recovery, as arduous as it has been, is “remarkable,” his mother said.

He says he has had 20 surgeries, including three brain operations, a tracheotomy, the insertion of metal rods in his legs and screws in his ankles, two eye surgeries and a nerve transplant that restored his ability to smile. Add to that countless hours of physical and speech therapy.

“If I had any idea what it would take when I got out of the hospital,” Mare said, “I don’t know if I would’ve wanted to try.”

Nevertheless, he returned to school in the fall of 2008 – although he was “still kind of in a fog” – and graduated with a psychology degree in 2009.
Still, baseball beckoned.

“Hearing about the things I did,” he said, “it was everything. Baseball was my identity . . . I didn’t want the accident to beat me and completely take that away.”

Mare tried to make the team in 2010 but was too far off physically. Coach Pete Timmes “feared for his safety.” That, of course, made him even more determined to come back and exhaust that last year of NCAA eligibility.

“He’s up at 7 working out every morning,” Steve Mare said. “The therapists can only do so much for you . . . If he hadn’t wanted to play again, I don’t think he would’ve pushed himself as hard.”

So the last year has been spent training, in addition to his continued rehabilitation. Mare worked with a running coach, jogs 11/2 miles each day and hits the gym five times a week. Last autumn, he started weekend batting-practice sessions with his high school baseball coach, Doug Manfredonia, whom he remembered.

Mare doesn’t remember his old swing, so he’s been taught a new one. “Coach gave him a more compact stroke instead of that uppercut he used to have,” his father joked.

So, three years later, an 0-for-1 in North Carolina? “It was a special moment,” teammate Bo Budkevics said – one with such meaning, Timmes added, that it was “hard to put into words.”

“I had my doubts, but then to see him in a uniform again, in a batter’s box again,” Steve Mare said. He paused and shook his head. “Who else but Joe, man?” 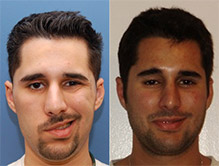